The Prophets Handbook details the roles and duties of the prophetic in the church and clearly explains its necessity.

Dr. Paula Price intelligently and skillfully explains the function and responsibilities of local church prophets and those who prophesy.

Her years of research and ministry have led to the ultimate guide to prophecy in the local church.

Get Your Copy of The Prophet’s Dictionary  by Dr. Paula A. Price

“Future seekers inquire about four things love, money, power, and health. For many of them little else matters. Will their plans succeed?”

When one enters the Bible prophets’ ministry world, he or she encounters their single greatest asset, answers. People received answers from the prophets because the Creator wrote everything down in eternity before time began.  Thousands of passages record God speaking prophetically to His creation.  Luke 1:70 says He did so by the mouth of all His holy prophets since the world began. Acts 3:21, 24 reiterate it. Sometimes Bible prophets were sought as an entire company or presbytery, at other times individually. Either way, one thing is sure, everyday people desired to hear from God. Our era’s multi-billion dollar psychic industry proves they still do. Society craves tomorrow answers today, and not just its leaders. No, the majority of those feeding that mega industry are everyday citizens determined to know how to handle and prosper their futures, so they seek future tellers.

Future seekers inquire about four things love, money, power, and health. For many of them little else matters. Will their plans succeed? When will they get married, have children or sadly divorce? Will their business thrive or fail and should they undertake this or that venture? These thoughts consume people, and they should. God programmed all of us to need advance knowledge and created prophecy to give it to us. Some get their answers from the dead (necromancy): God’s people seek His prophets. Knowing He has a plan for their lives, they look to prophetic messengers to unfold it. They accept Isaiah 46:10 and 55:11 as true. The Lord declares the end from the beginning and allows none of His words to return to Him unperformed.  Here is the premise for all prophecy. The Prophet’s Dictionary explains its sources on pages 101-109.

God wrote the end of all human affairs before they happened and filed it in His eternal chronicles. He then created prophetic people to obtain that information from His records. This is how prophecy differs from divination (psychic readings). God’s prophets foretell actual events that He sovereignly encoded in creation. With our life plans embedded in its generations, He synchronized them with creation’s seasons. Psychics answer your heart by seeking the dead, see Isaiah 8:19.

Scripture interlocks prophecy with eternity and the future over 400 times to show how it accomplishes God’s will. Our Savior confirms this by revealing that His entire ministry was choreographed by prophecy. Repeating it throughout the New Testament, He finally canonizes it in Luke 24:44. The Lord’s prophets, for these reasons, cannot make up prophecy, nor would they think to do so.  Even Old Testament prophets whose writings did not make it into scripture contributed to eternity’s world governance through prophecy. Jesus’ constant references to them establish the prophetic as a biblical institution. Since all scripture was written for the generations to come the prophetic should function similarly today, and not just in the church. However, before the church can trust personal prophecy en masse, several things must happen. Many of its valid issues and concerns should be maturely addressed.

To start, modern prophets must unify, and uniform their diverse expressions. The common features that identify them must be standardized, taught and disseminated. Next, what sets the Lord’s prophets apart from the world’s psychics must be explained and portrayed. The everyday person should be able to tell what makes prophets different and communicate it to others. Clear lines should be drawn between the gift of prophecy and the weight of the office. The prophets themselves, to advance their assignment, must exceed their initial gift mentality and clarify for the body their mantle’s rationale. Prophets and apostles must merge to restore credibility and viability to their individual and joint service.

All Christians should take Prophecy Basics classes to appreciate the differences between prophets and the pastors, evangelists and teachers they have heard for so long. John the Baptist, a transition prophet, was sent by God to pave the way for Jesus’ coming. He was to make straight paths for the Lord Jesus as God’s Great Prophet. Spiritually, this means the prophet had to work receptivity to Christ’s message in the people’s psyche. To us it says that personal prophecy will be only sporadically effective until Christ’s church truly comprehends it and its purposes. Christians must be primed for God’s prophetic mind. Else prophecy will continue to fall on mostly deaf or critical ears because people misunderstand how God uses it. The wider body of Christ must cultivate an ear for the prophets’ voices to heed them and trust their capacity to accurately prophesy. The prophets themselves will have to submit to uniform training and education to improve their standing and reputation. Doing so can override people’s conditioned negative response to them. Future success calls for a sensible, consolidated training program where the prophets gather, cohere, and distill their doctrine and expressions for the body.

Until the above improvements occur, personal prophecy should be handled with great care, because even if a word is true an untrained hearer may misunderstand and disregard it. Such was the case with our early prophets. The customary preparatory work done by many institutions and industries before launching change was not effectively carried out by them, so people received prophecies without the guardrails of scripture’s wisdom and righteousness. Frankly, most of it just lacked plain old common sense. Untried prophets gave unverifiable words. Newcomers were endorsed and promoted strictly because of their gifts. Exuberant well meaning novice prophets practiced before they learned because hungry seekers pressed them into service too soon.

To get it right this time, let’s police and correct ourselves by setting up structures and policies that restrain the irrationality people have come to associate with the prophetic. Let the prophets themselves resolve to “study to show themselves approved unto God…” and cease being ashamed workman incapable of “rightly dividing the word of truth.” God and His people can be abundantly blessed by the oldest ministry institution on the planet, if we all resolve to handle our second chance wisely and responsibly. 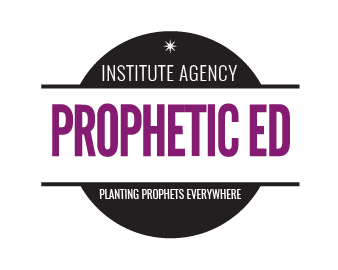